Internet Dating for Nerds: Discovering your Roots with Google

Postscript October 8 2014
No wonder nerdy Iranians such as the Hollywood star and genius comedian Omid Djalili    love backgammon so much, they invented it and called it the game of nerds!

Trumpet from the rooftopsPublic Domain
A famous Iranian (Iranians were once known as Persian) "favourited" this news.

Once again my deployment of the powerful new research method of Internet Dating that is facilitated by Google’s incredible Library Project has overturned orthodox knowledge claims regarding the origin of another word or phrase. This time it takes us back to the real origin of the word nerd in the English language.
If you use Google to seek out the origin of the word nerd you will find that every single source, even an entire website devoted to nerds   , has it that Theodore Geisel, whose pen-name was Dr Seuss first used the word nerd in the English language in his 1950 book “If I Ran the Zoo”. One not untypical example of this ‘knowledge’ is Wikipedia’s page on the subjec   t, which is presumably moderated by the world’s top nerds. At the time of writing (15th March 2013) those nerdy Wikipedians have it that:

' The first documented appearance of the word "nerd" is as the name of a creature in Dr. Seuss's    book If I Ran the Zoo    (1950), in which the narrator Gerald McGrew claims that he would collect "a Nerkle, a Nerd, and a Seersucker    too" for his imaginary zoo.'

David Wilton’s excellent Wordorigins.org provides us with one of his typically excellent accounts. Wilton, who is author of Word Myths: Debunking Linguistic Urban Legends, is one of my favorite mythbusters. On his website, Wilton writes about the word nerd:

‘The origin of nerd is not known, but there are two leading contenders. The first, more likely, explanation is that it is a variation of Mortimer Snerd, a dummy used by ventriloquist Edgar Bergen. Snerd was a buck-toothed yokel of limited intelligence and the wordsnerd has some slang currency meaning a fool or idiot back to at least 1948. From the Walla Walla Union Bulletin (Walla Walla, Washington) of 1 February 1948:
They’re Not Snerds. That Stalin, Molotov and Vishinsky are plain stupid is a conclusion to be wary of.
And there is this from the Waukesha Daily Freeman (Waukesha, Wisconsin) of 29 August 1949:
You can almost see and hear the Snerdish inhabitant blushing and admitting, in his infinite greenness: “I come from Gurkee’s Corners. Have a chaw?”
While Mortimer Snerd certainly does not fit the current usage of nerdmeaning a bookish person, it does fit quite well with the original sense of a boring and unremarkable person.
The second explanation is that it is a reference to the 1950 Dr. Seuss book If I Ran the Zoo, which contains the lines:

I’ll sail to Ka-Troo
And Bring Back an It-Kutch, a Preep and a Proo, a Nerkle, a Nerd, and a Seersucker, too!

While it is possible that this is the origin, it appears unlikely. How the transition from an undescribed and imaginary creature to a person occurred is not explained. Also, the date is very close to the 1951 date of the first known slang use of nerd and it is very likely that an instance of the slang usage will be found that antedates the Seuss book.’

I expect that as Google scans more obscure documents from dusty library shelves that Wilton’s prediction that we will find an earlier slang usage of nerd may well be correct. Meanwhile, I can attest as of today that his other hypothesis that Dr Seuss’s 1950 book may prove not to be the true origin of the word nerd is indeed correct. Because last night (14th March 2013) I discovered the earliest known published usage of the word nerd is 1799.

So for all my dearest fellow nerds, here is the true (well, to-date at least) word origin of our kind. The source of the nerd is Ouseley (1799) pages 85 and 86    . If you click the image of the text it will enlarge. 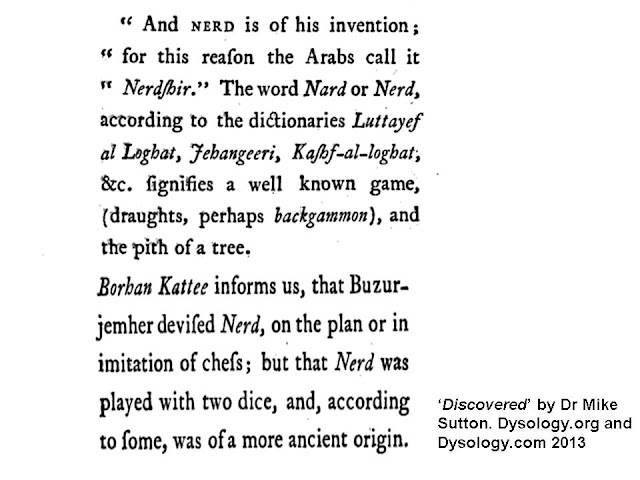 Postscript 12 April 2013 - Now that I have busted this myth, we should expect Wikipedia editors to plagiarize my unique myth busting information on this blog post by taking this new information from this very blog post and then pass-it-off as Wikipedia's own work in order to conceal its own inept myth mongering. Here is a blog on Wikipedia's toxic stealth plagiarism policies and my other work that they have plagiarised. The comments from the Wikipedians involved are most revealing.

Mike Sutton 2013Attribution
The Original Nerd
That we nerds have not until now discovered for ourselves the true Persian origin of our own namesake, despite using all of our best nerdy skills and knowledge, is perhaps the most poignant indicator yet that Internet Dating is going to cause a massive knowledge flux in the 21st Century now that we have in our possession this new method of mass myth mutilation.

How to reference this article:

Email ThisBlogThis!Share to TwitterShare to FacebookShare to Pinterest
Labels: Nerd