UK Prime Minister Boris Johnson finally backtracks and admits masks do work "epidimiologically" to reduce the spread of Covid-19 but fails to apologize - as he stands besides his science advisor Chris Whitty who, along with Jenny Harries and others, said masks for the public do not reduce the spread of the virus and may make it worse. Boris is going to be recommending them soon he says as we come out of lockdown. But that is lethally illogical. Because if masks and other face coverings most likely do work then they should be insisted upon immediately, or else thousands more lives will be needlessly lost! 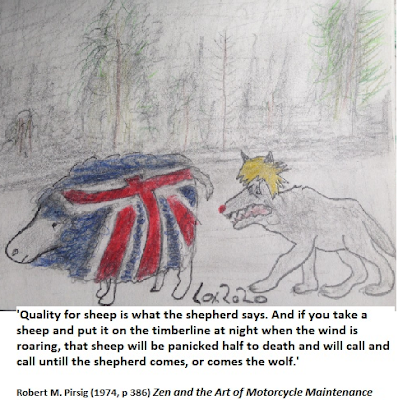 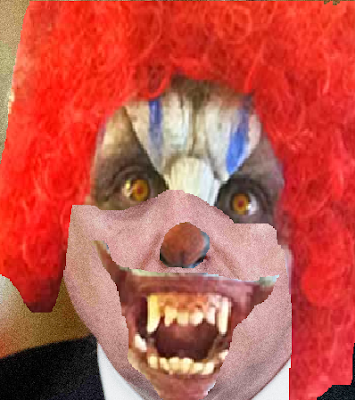 It seems that Boris and his motley crew of science advisers would rather more people die as a result of their flawed thinking and whack-job mere beliefs and idiotic assumptions than admit they have been wrong all along about public use of face masks.

Posted by Dysology at 12:28 No comments:

Lies, Bullshit or Something Else?

Here we see Jenny Harries  - UK Deputy Chief Medical Officer - telling Boris Johnson on March 11 2020 that we should not close mass events and the public should not wear facemasks to reduce the spread of Covid-19 outside the home!


Now, in contrast, there is evidence, logic and rational argument published in the British Medical Journal for why all governments should be advising members of the public to wear face masks during a Covid19 pandemic HERE

What a useless prat Starmer is looking! Boris just said masks for the public will save lives. But has not apologized for being wrong on that & has not told the public to wear them right away. Why? Because he was wrong before as were his so called "experts" https://t.co/dc5Qx7As48
— Dr Mike Sutton (@Criminotweet) April 30, 2020

. More on the video and what scientists actually knew on the matter on March 11 HERE

The UK Government and US Government have the highest death rates for Covid19. Neither Boris Johnson nor Donald Trump recommend the general public wear masks outside the home. Although US Government advisers advise their general population to do so. Trump told the general population that it's voluntary and the he won't wearing one. Since both idiots have clown hair as their trademark you have to wonder about the idiot hair vanity clown effect in their world leading death rates. Is it that they think masks would make them look even more ridiculous? 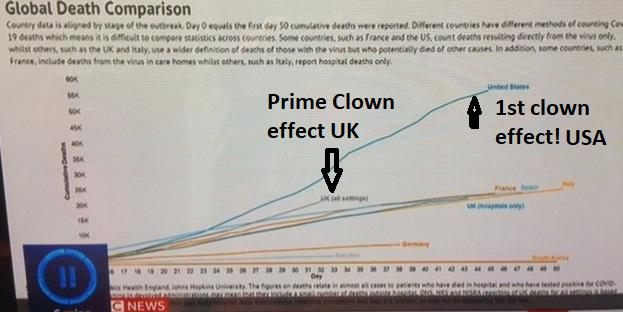 For those who prefer excellent scientific articles on the topic - as opposed to total nonsense based on the assumption of public stupidity - please read this (here).

The #PrimeClown's stupidity is in not being a leader but a follower. He allowed himself to be led by sh#it~in~sh#it~out #numberwanger #fckwits called "brilliant modelers" and their thicko #managerialist enablers. Modelers of what? Bulls#it covered Lego? https://t.co/wkpGg5bkBx https://t.co/FCuyunAh2K
— Dr Mike Sutton (@Criminotweet) April 23, 2020

.
Copy made in the public interest in case the Tory Government deletes the evidence

Is Jenny Harries Advising Boris how to best infect the UK population! from Mike Robert Sutton on Vimeo.

PLEASE NOTE: There is a sister blog post on the theme of death by bullshit on the Crime Talk blogsite HERE

I am #MasksAgainstCoronavirus reliably informed that this is considered the best lock-down film by members of the Office of the #PrimeClown struggling with the fact they have been wrong all along about the public wearing of facemasks outside the home: https://t.co/RE0mm8dd52
— Dr Mike Sutton (@Criminotweet) April 24, 2020

Exactly. Many arguments made by so called UK experts about face masks for use by all outside the home being a bad idea are based on presumptions of public stupidity equaling idiotic face touching politicians.

If it did I am sure they would question the idiotic medic presumptions that for some reason UK citizens are all morons who can't safety wear a mask in public:https://t.co/IQXeLmqYbv
— Dr Mike Sutton (@Dysology) April 28, 2020

Don't be oh so obviously mass manipulated by the Government and infantile media to clap the NHS by these moronic clockwork clapping, blood-on-their-hands, clown monkeys in order to hide their utter murderous incompetence of NHS staff: https://t.co/hbC3R4FDmC pic.twitter.com/3Nosps0Uca
— Supermythbuster (@supermyths) April 28, 2020

Posted by Dysology at 09:39 No comments:

For example, many simply claim that Richard Dawkins first coined the term "selfish gene". But he never. The term was coined years earlier in published print by his mentor William (Bill) Hamilton - see Sutton and Griffiths (2018) for the expert peer reviewed fact of the matter.

Today, during week four of the UK Covid-19 lock-down I was idly browsing through the shelves of my library looking for something interesting to read. My hand alighted on a book I can't remember reading. When I flicked through it I found a note I had written in ink pen on one of the pages. I wrote: "Check if this is true" on page 152 of the book entitled 'Think: Why You Should Question Everything' by Guy. T. Harrison (2013) where the author of that book has it: 'The earliest known mention of the Bermuda Triangle was an article in Argosy (February 1964).'

Ironically, Harrison did not question this widely published claim himself, because following my directions written several years ago, I found an earlier mention the Bermuda triangle. The 1950 publication tells us that Pan American Airways provided trips to the area described as 'Bermuda triangle' (click here to visit the Google books scanned snippets entry, archived here). 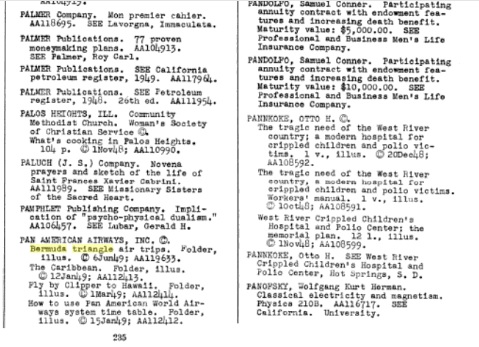 In fact, there are many mentions of the area described as Bermuda triangle before 1964. The notion of the Bermuda Triangle being a meme about aircraft and ships missing within it is of course a different matter, because there we are talking about a concept about the area, rather than just a phrase, term or title for the same area. But we must remember exactly what Harrison wrote above. And when it comes to earliest mention of the term Bermuda triangle, or even about the dual capitalized version 'Bermuda Triangle', he is plainly 100% wrong. But he is clearly right that we should question everything we are told.
Posted by Dysology at 07:24 No comments:

I have been Tweeting for weeks that the UK needs to insist we all wear masks outside the home. I see today that in New York that is now the official advice. Sadly, so called experts have advised against this in the UK.

All those TV doctors and scientists etc who have been trotting out the party line the masks don't work claptrap on TV - to merely tow the establishment line to keep their money making work with broadcasters should be ashamed. Many people have most certainly died as a result of such rubbish. A mask of any kind (the better the better however) will cut down the amount of infected water droplets spread by a sneezing, coughing and talking wearer and will reduce the amount of exposure to such droplets by wearers. That is simple logic.

Hi Mike, The health & safety of our customers is our highest priority. Existing hygiene measures are in place and we've taken additional steps to reinforce these across the business. All customer feedback and suggestions are passed onto the correct departments. ^AM

Then when will you be offering sanitizer for customers before handling baskets and trolleys?

And why on Earth do you have unwrapped baked goods on shelves where infected customers will breath, talk over, cough over and sneeze over?

This is highly dangerous during a pandemic. https://t.co/VUVhRbWUSj

Posted by Dysology at 04:18 No comments: