The Vitamin C and Iron Myth: Death by Quackery?

Research across the board shows that the evidence is at best inconclusive regarding whether or not vitamin C can help us to better absorb iron from non heme iron sources such as spinach and other plants (see Sutton 2011).

Official advice that vitamin C is known to enhance the iron absorption from plant and other non heme sources is wrong. This advice is wrong because the overall evidence, from the results of many properly conducted trials is that we have a mixed bag of disconfirming and confirming research findings. In sum, evidence of the iron absorbing benefits of vitamin C (ascorbic acid) in our diet is at best inconclusive.

Unfortunately, the websites promoting vitamin c in this way ignore all the disconfirming evidence.

In light of the facts revealed in a paper published by Best Thinking (Sutton 2011), I am grateful to the USDA for deleting their misleading spreadsheet from the Internet, which claimed that drinking Florida grapefruit juice would help humans to absorb two to four times as much iron from spinach as would otherwise be possible.

Unfortunately the US Government Office of Dietary Supplements (ODS) continues to claim that vitamin C will increase the iron absorption form non heme iron sources, such as spinach, as (ironically) does the US Center for Disease Control (CDC) and prevention: http://www.cdc.gov/nutrition/everyone/basics/vitamins/iron.html. Unsurprisingly Wikipedia makes the same erroneous claims.

Many other websites - including one run by MIT (http://web.mit.edu/athletics/sportsmedicine/wcrminerals.html) also continue to boldly claim that vitamin C helps with iron absorption.

Since low iron levels - linked to poor diet - kill people in large numbers (see http://www.bestthinking.com/thinkers/science/social_sciences/sociology/mike-sutton?tab=blog&blogpostid=9942,9942 ) there should be more care taken to get the facts right.
Here are just few of the very many web sites that still promote the fallacy (or at least to promote vitamin C in this role when the evidence is inconclusive) some are giving advice on cancer - other are for children's diets.. Just Google ‘iron vitamin c’ and the list seems endless:

If poor nutrition directly kills, and in other cases takes years from life spans, it seems reasonable to speculate that erroneous nutrition advice, if relied upon, might do likewise.

We can only hope that not a single one of the tens of millions of lost years of life globally - and the many hundreds sometimes thousands of deaths that happen as a direct result of iron deficiency each year in the USA - are due to that earlier bad science promoted by the USDA. And we can only hope that the hundreds of thousands of deaths occurring each year on Earth (Stoltzfus 2003) from iron deficiency are not due to current US Government and private sector bad science promotion of vitamin C as a miracle way for humans to better absorb iron non heme iron sources, such as spinach. Because,surely, that should be 'criminal' quackery.

Sutton, M. (2011) SPIN@GE USA Beware of the Bull: The United States Department of Agriculture is Spreading Bull about Spinach, Iron and Vitamin C on the Internet: http://www.bestthinking.com/articles/science/chemistry/biochemistry/spin-ge-usa-beware-of-the-bull-the-united-states-department-of-agriculture-is-spreading-bull-about-spinach-iron-and-vitamin-c-on-the-internet
Posted by Dysology at 03:28 No comments:

DOG IN THE MOON 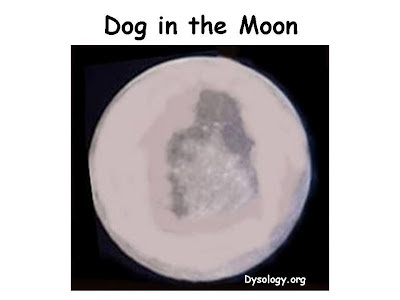 Do wolves howl at it because there is a dog in full moon?
Check out bias and pattern recognition - over on Best Thinking it leads to all kinds of fallacies, myths, bad research, bad eyewitness testimony and money making on eBay.
Reference:
http://www.bestthinking.com/thinkers/science/social_sciences/sociology/mike-sutton?tab=blog&blogpostid=16733
Posted by Dysology at 06:59 No comments:

Read the latest mythbusting on Best Thinking: Opportunity Does Not Make the Thief
Posted by Dysology at 00:26 No comments: