The cover of my forthcoming book is actually green.

If you see a red cover then you almost certainly have the red mist of anger. Perhaps you are angry at the fact you have been duped all these years by the Darwin Industry? Or perhaps you are one of the Darwinite horde suffering from new data hater syndrome? 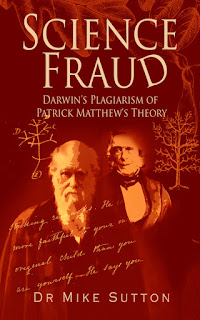 There is only one cure. Buy my book and be inoculated against lies and other total nonsense about Charles' Darwin's genius originality. He was little more than a serial lying apex plagiarist.
This book relies entirely on what Professor Michael Streven's calls the "Iron Rule" of science, namely empirical facts, and new BigData unearthed ones at that, to prove beyond all reasonable doubt that Charles Darwin and Alfred Wallace plagiarised the theory of evolution by natural selection from Patrick Matthew.

"Science Fraud" reveals how malicious New Data hater Darwin superfans and others, facilitated by members of the Darwin Industry, have committed repeat research plagiarism, tried multiple times without success to have the author fired from a senior academic position, and spread misinformation via Wikipedia and elsewhere in an attempt to re-bury the cast iron bombshell New Data on Darwin's and Wallace's plagiarism and associated lies.

SCIENCE FRAUD: DARWINS PLAGIARISM OF PATTICK MATTHEW'S THEORY ...
A telling snippet from Emma Darwin to Patrick Matthew about Matthew's theory of the natural process of selection ...
"... He is more faithful to your own original child than you are yourself ..." pic.twitter.com/WCBRSrYlyD

Posted by Dysology at 08:02 No comments: