Routine activity theory is merely a truism dressed up as causality

So much for RAT opportunity theory

A mere description of a successfully completed crime does not explain its cause https://t.co/uoTkEwhLbp pic.twitter.com/JnZC1QWcDo

Posted by Dysology at 12:14 No comments:

Posted by Dysology at 12:17 No comments:

Email ThisBlogThis!Share to TwitterShare to FacebookShare to Pinterest
Labels: delusion

Cheer up a Darwinist this Xmas 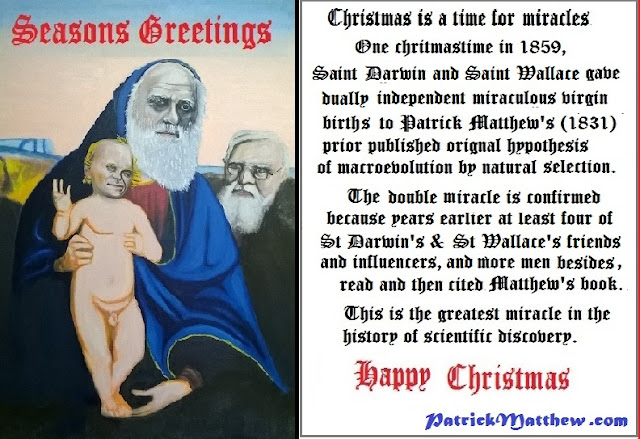 Posted by Dysology at 08:52 No comments:

Email ThisBlogThis!Share to TwitterShare to FacebookShare to Pinterest
Labels: Xmas for Darwinites

On The Rifkin Imperative


Superhighway Robbery is a superb classic crime documentary, which is currently available for viewing on YouTube.


There are many lessons to be learned from the cases explored in this high quality TV programme about how offenders exploit new technology and how industry, governments and police services respond in a virtual arms race (See Sutton 2012).
Most importantly, in this superb documentary we can see evidence of a human characteristic that we might name the: "Rifkin Imperative".
The story very early told in the documentary is that that despite Professor Stanley Mark Rifkin getting away with committing a $10 million computer fraud, and despite then laundering the stolen money successfully into "clean" diamonds, he just had to let someone know what he had done. Over the years, I've seen this apparent human characteristic lead to the detection of many serious offenders.
The "Rifkin Imperative" is essentially that many people - having gotten away with something they think defines them as very clever or very successful - feel that their clever deviant accomplishment is incomplete unless someone appreciates their greatness. After all, how can you feel complete as a "great and smart achiever" if no one in the world knows it was uniquely your personal great achievement?
More research is needed. For now, I think we should think of the "Rifkin Imperative" as a hypothesis in need of further criminological research. If confirmatory evidence is found for its universality, then law enforcement agencies - with a little lateral thinking - will know what to do when they have a suspect; or perhaps, even how to go fishing for one!
That said, my thinking here is far from original, because police officers are well aware of the potential for offenders to brag about serious crimes that they "got away with". For example, we know from recent history the dangers of police honey traps, such as that used in the Colin Stagg case   , where Stagg was fingered as a likely offender by criminal profiling.
With Stagg in their sights, as the local weirdo, the Metropolitan Police sought out his criminal bragging to a murder. To be precise, they surreptitiously sought from Stagg - in exchange for the promise of sex with an attractive undercover police officer - a confessional bragging that he had committed the 1992 Wimbledon Common murder of Rachel Nickell.
But Stagg never bragged, because he never did it.
The case was thrown out in court and police officers involved in the Stagg Case were admonished by the judge for what they did. Nonetheless, and most convolutely, the "Rifkn Imperative" is actually confirmed in this case. The reason being, whilst Stagg was innocent, the real killer - Robert Napper - had years before he confessed to being Rachel Nickell's killer - bragged to his mother in 1989 that he had raped a woman   ! Police failed to follow up when Napper's mother informed on him. Had they done so, then most surely, Rachel Nickell would not have been murdered and Colin Stagg would not have served 13 months in prison.
There will always be the problem to deal with of of those telling fantasy tales and feeling compelled to make false confessions.Meanwhile, to say it's early days in the research process is a massive understatement. Nevertheless, the Colin Stagg case sets the current score at 1--0 for The Rifkin Imperative versus offender profiling.

The Metropolitan Police Service officers who bungled the Colin Stagg Case and top academic Darwinists who have bungled the history of discovery of natural selection have several key characteristics in common:
(1) Breathtaking incompetence, (2) blinkered decision making (3) "obscure person weirdofication" (4) wholesale failure to follow evidence.
See my post on the PatrickMathew blog    for a longer discussion on this precise topic, and all pages on http://patrickmatthew.com/    for an evidence-based analysis of all the facts.
POSTSCRIPT 4th April. 2014
Posted by Dysology at 01:16 No comments:

Email ThisBlogThis!Share to TwitterShare to FacebookShare to Pinterest
Labels: The Rifkin Imperative

Tautology in Mockery and the Bellman's Fallacy Examined

Get the low-down on mockery, tautology and the "Bellman's Fallacy". Here: https://t.co/iAnfYaOf8F pic.twitter.com/vSKZvNqRpZ

Posted by Dysology at 01:31 No comments:

How Ambivalence Towards Hacking Led to US Political Disaster

The establishment in crises One point missed is ambivalence toward hacking led to Trump becoming Mr President Trump: https://t.co/31KmfhCXVl pic.twitter.com/NikCb4VuKm

Posted by Dysology at 01:57 No comments:

Email ThisBlogThis!Share to TwitterShare to FacebookShare to Pinterest
Labels: hacking

Posted by Dysology at 14:20 No comments:

Is Darwinism Now a Cult?

Posted by Dysology at 03:25 No comments: