PRE-ORDER from the science publisher Curtis Press NOW to secure a first edition copy. There is limited offer £4.95 discount off the price of this book for anyone ordering today using the special code fraud2022 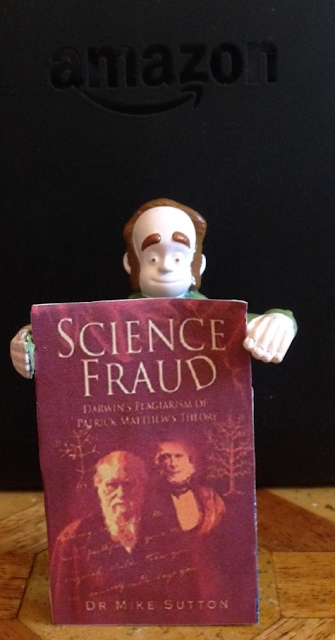 Also available from Amazon HERE
Posted by Dysology at 12:25 No comments:

Brain J. Ford on the Sonia Poulton show in January 2022

When I contacted Professor Brian Ford to let him know that my "Selby cited Matthew discovery" research had twice been plagiarised in the Biological Journal of the Linnean Society it was me to who Brian responded with what he says in the above the video.
"If you’re in the public eye and you make an impression, people are going to steal your work. It's actually the ultimate compliment. If in science you haven't been plagiarised, it's because you haven't done anything decent. The minute you do, some miserable two-faced, dishonest bastard is going to come along and steal your work and claim it's his own."
In this programme Professor Brian Ford, on a broadcast show hosted by Sonia Poulton and Sean Ward provides us with the perfect quote on plagiarism. It should become a renowned quote, just so long as it is not plagiarised and attributed to another person. To try to prevent that happening I have added this video and his words on plagiarism to his page on PatrickMatthew.com - a  website all about the worlds greatest science fraud by plagiarism. If you read Brian's book "Nonscience" you will find quite a bit about plagiarism, including Darwin's plagiarism of Patrick Matthew.

Incidentally, an "expert" in Latin and etymology will tell you "The word plagiarism has a curious history. It is derived from the Latin plagiarius—literally, a kidnapper who ensnares children or slaves in a plaga (net)."

Good grief! Were such people with their nets just like the evil Child Catcher form Chitty Chitty Bang Bang?

Someone like me can tell you that I found that Latin route of plagiarism information on the Internet and, having studied the topic just a bit, I know it's correct. What does this tell us about experts? Either way, if I ever definitely need heart or brain surgery for an expertly verifiable fact, I think I will go to an "expert" to perform the surgery rather than ask Brian to do it on his kitchen table. That said, an "expert" surgeon wanted to give my wife an operation to remove fibroids, that carried a 50% chance of rendering her "sterile" so she could increase her chances of conceiving a child. As a non-expert on surgery I thought about it and said we would defer our decision and try to conceive for another year. No surgery was required (with no 50:50 chance of it going wrong and additional risks of death from the anaesthetic etc etc). We now have a daughter. Conclusion = Brian has a point, but his book is satirical and so everything in it should not be taken literally. Reality is often (not always) more nuanced than this programme lets on. But then that's entertainment folks! So being most entertaining carries risks. I don't know, perhaps we should ask Donald Trump and Boris Johnson about that one? But would they tell us the truth? And if they didn't, would their millions of adoring fans care?

Posted by Dysology at 01:47 No comments: