The Real Etymology of Thanksgiving

The website of the History Channel - History.com    provides a neat summary of the history of the first American Thanksgiving in the Plymouth settlement in America, which is marked as the year following the first 1620 settlement of those who sailed from Plymouth, England, to what they then, unimaginatively, named Plymouth - in America - where they settled:

'In November 1621, after the Pilgrims’ first corn harvest proved successful, Governor Wiliam Bradford organized a celebratory feast andinvited a group of the fledgling colony’s Native American allies, including the Wampanoag chief Massasoit. Now remembered as American’s “first Thanksgiving”—although the Pilgrims themselves may not have used the term at the time—.

Whilst Americans get together on the fourth Thursday in November every year for the sensational celebrations, the word Thanksgiving (and the term thanks giving) had been used regularly back in England and Scotland to name officially days of Christian religious celebration - usually in thanks for some kind of peace following military victory.Thanksgiving days were, therefore, a tradition brought over to the American colonies from England and Scotland.

Thinker Media IncUsed only with express written permission
Nullius in Verba
The BigData-ID Method (See the freely available Chapter Two in my book: Nullius in Verba Darwin's greatest Secret)   , once again, just as it does in the case of theEaster Bunny, Halloween and Guy Fawkes Night, beats the Oxford English Dictionary and all other etymological sources to reveal the apparent first English-language use of the term thanksgiving day, as well as its apparent first use to refer to the American celebration - but not the one in Plymouth.

The Plymouth Brethren were far from being first with a Thanksgiving day in America.

There are in fact many contested cases in the USA for far earlier Thanksgiving days (see Coleman 2015)   . For example, see the 1622 publication of Virginia's Thanksgiving sermon of 1616.     Coleman's excellent evidence-led book explains that only a dreadfully poor historian would claim that the origin of the term 'thanksgiving day' or even the origin of the concept of the American holiday to celebrate it has its roots in Plymouth, Massachusetts, in 1621. The only reason so many American's have been fooled is because long powerful and dominant interest groups in America came from that region.

The term "thanks giving" -

Here is the best effort of inferior etymology provided by the Oxford English Dictionary (OED) in what it publishes, at the time of writing - (8th November 2015) as the earliest attested publication of thanksgiving day.

Posted by Dysology at 15:37 No comments:

November 5th it is what we in the United Kingdom of England, Scotland, Wales and Northern Ireland now call Bonfire Night, or else Guy Fawkes' Night or else Firework Night. But, whatever individuals call it now, the day was first celebrated as Gunpowder Treason Day.
November 5th public celebrations of Guy Fawkes effigy burning followed the discovery on 5th November 1605 of the plot to blow up the Protestant Houses of Parliament. Guido - "Guy" - Fawkes and fellow Roman Catholic conspirators were horribly tortured and then horrifically executed by being hung drawn and quartered.
Names for the nightly celebrations of the capture and demise of Guy Fawkes and Co and the saving of Parliament have evolved for over three hundred years.
Just like Wikipedia, my "Cassell's Dictionary of Word and phrase Origins' by Nigel Rees (1992) sums up - with unsatisfactorily vague decade only dates regarding word and phrase origins of these various names. The same criticism goes for Brewers Dictionary of Phrase and Fable (19th Edition 2012) and Chambers Dictionary of Etymology (2012).


Whereas the ID method gets us back as far as 1811 (see my timeline, below and Appendix 1), The Oxford English Dictionary (OED) can get back only as far as 1826 for the first published use of "Guy Fawkes Day:

Worse, the OED can get back no further than 1936 for the term 'Bonfire Night', whereas the ID method takes us as far back as 1705 (See my timeline below and evidence in Appendix 1).
From the OED:

'Guy: an effigy of Guy Fawkes burned on a bonfire every 5th November to commemorate his part in the gunpowder plot, an attempt to blow up King James 1st and parliament in 1605. Fawkes was executed and the name 'guy' was being applied to such an effigy by the early 19th century at least. From thence, the word was applied to any disreputable person, and thence - particularly in the US from the 1890's - to any man, good as well as bad.'

Timeline (in date order) of the 'at the time of writing' earliest discoverable use of Guy Fawkes Night, November 5th, names:

Using my original Big Data ID research method (Sutton 2014   ), today (1st November 2015) I conducted the first ever fully dated November 5th etymology of the origins of different names for Guy Fawkes Day.
The dates listed in the timeline in this blog post represent the first usage of these names that can be found today amongst the 35+ million books in Google's Library project. No doubt, as more books are scanned, these dates may one day be superseded by new discoveries of earlier usage. For now, however, these dates give us the first ever precise pinpointing of first known useage of various names for Guy Fawkes Day:
Further original discoveries made with the ID method can be found in my A-Z of newly busted myths in Nullius in Verba: Darwin's Greatest Secret    (that chapter is free for you to to view at Amazon books at absolutely no cost whatsoever). 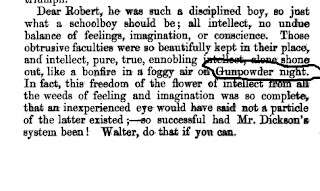 
Is this the first published use of Fireworks night?
Firework Night - Strutt (1801)


Is this the first published use of "Firework night"?
Posted by Dysology at 12:03 No comments: