Charles Darwin is no paragon of science in this story. There is no place for respectability on a creaking wooden ship manned by a 'gentleman of science', hell bent on becoming an immortal great thinker in science, by plundering the unique discovery and ideas of another   , placing him only once removed from the villainous ancestor who accumulated the wealth in the first place, upon which his 'respectable' persona is built. In fact, that bloodthirsty yeoman of a robber baron who made the Darwins so privileged deserves our respect more than the World's greatest science fraudster could generate in a dozen science stories.

Trumpet from the rooftopsPublic Domain
Charles Darwin: The World's Greatest Science Fraudster
So I didn't go out of my way to look for honour in the face of Darwin in this book, as he is as good and bad as anyone who finds themselves caught up in the mad scramble for ill-gotten gain and it makes the tale of Darwin, Wallace and Matthew that much better.

Nulius in Verba: Darwin's Greatest Secret is a rollicking new evidence-led tale of piracy and plunder of the most important discovery in the history of science   . Published by ThinkerMedia Inc and available on this website for the price of no more than two flagons of ale or a double tot of rum at The Chequers Inn in Loose Kent, one of my favorite English pubs - caught posing here for Ralph Steadman as the Admiral Benbow Inn from Treasure Island.


This blurb has been plundered, in no small part from Ralph Steadman   .

Posted by Dysology at 00:25 No comments:

Were Wallace and Darwin Schnooks or Crooks? 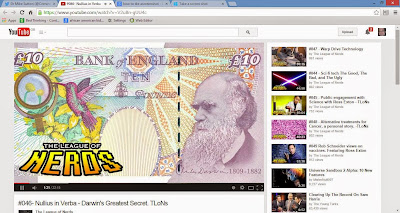 Click HERE to listen to the interview between Myles Power and Me
Posted by Dysology at 03:04 No comments: