Science, facts and 100 per cent proof of a thing


#Ironic book on myths acknowledges I bust the spinach #supermyth bu gets facts totally wrong on my employer and profession. I can 100% prove it. Even though so many dumb scientists think you can't 100% prove anything. 🤣🤣🤣 pic.twitter.com/yunb4HqjsO

Posted by Dysology at 05:36 No comments:

Email ThisBlogThis!Share to TwitterShare to FacebookShare to Pinterest
Labels: 100% proof

Did Darwin Cause the Holocaust?

Posted by Dysology at 02:04 No comments:

On Rekdal, Citations and Poison Irony

On the downside of bad research. Source here 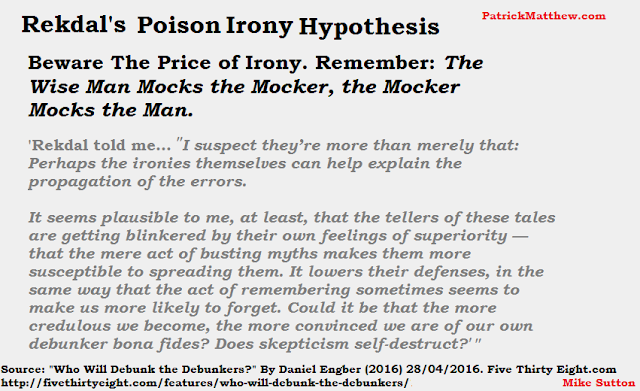 Posted by Dysology at 03:23 No comments:

Posted by Dysology at 07:26 No comments:

The eminent scientist professor Brian J. Ford and I have both been plagiarized. Brian told me of his worst experience in a personal email communication, so I will not reveal it here. I expect he will share it with the world in his own time. In my case, I have been plagiarized a few times. Most recently my unique work was plagiarized by "Darwin Lad" Dr Joachim L Dagg in the Linnean journal (the very same journal that allowed Darwin and Wallace to plagiarize Patrick Matthew in 1858!).  Dagg - who has cyber-stalked me for years - and written two nonsense reviews of my book Nullius in Verba: Darwin's greatest secret - knows I discovered it yet still passed off my Selby cited Matthew in 1842 orignal discovery as though he had discovered it for himself (facts here)!

Brian Ford has written two articles on Darwin's lack of originality on the the theory of evolution by natural selection (here and here). Most importantly, in his 1971 book 'Nonscience' Professor Ford writes (p. 142) on how some scientists are famous not for their genuine originality but for hoodwinking the world they were genius originators simply because they published on a bombshell breakthrough at the most timely - "what Ford names Fashonistic" - time:

'Charles Darwin used much the same kind of ploy too, by writing his thesis at exactly the most Fashionistic time, when everyone was discussing it. He wasn't the first to propose his particular interpretation, of course, but his use of Fashionism and the clothing of the argument in detailed observations of animals in general made the whole project an obvious winner."

What Professor Ford does not write, but which is perfect support for his 'Fashionism' argument is what Matthew wrote to Darwin and the entire world in a published open letter of  May 12th 1860 in the Gardeners Chronicle and Agricultural Gazette (p 433): that his work was read and cited but that many feared to cite it - including an eminent professor - and that it had been brute censored (see Sutton 2017 p. 111 for the fully referenced details). In that and in an earlier published letter of April 1860 Matthew clearly told Darwin and the world that the world was not ready for his theory in 1831 when it first appeared in print.

Posted by Dysology at 02:07 No comments:

The times they are a' changin'.

The paradigm change is here.

Posted by Dysology at 05:24 No comments: 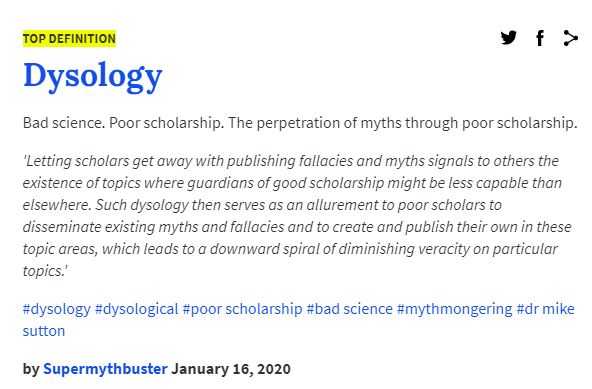 Posted by Dysology at 01:45 No comments:

Email ThisBlogThis!Share to TwitterShare to FacebookShare to Pinterest
Labels: Definition of dysology

Click the link to see the unethical, harassing, demented and at times criminal, activities of Charles Darwin superfans


There is a nasty underside to Darwinism. That's not a conspiracy theory. It's fact. Prof Brian J Ford has written about it. I'm showing the world verifiable details of what Darwin fanatics do without a word criticism from the scientific establishment. e.g. https://t.co/Ko6Z7GCth2 https://t.co/vRys8CXPbR
— Dr Mike Sutton (@Criminotweet) January 5, 2020

Posted by Dysology at 02:28 No comments:

Get the facts not the spaff

In the #RoaringTwenties In addition to Boris & Trump, I nominate Charles Darwin for the 2020 #SpaffingTwatties award. He spaffed his immortal reputation up the wall in the 19th century.

Don't get their #spaff on your face! Get verifiable facts! https://t.co/T6Iw1oBjkV pic.twitter.com/6Ckxmj4gjn

Facts always burrow to the top in the end. Darwin worshipers are worse than religious nutters in their hatred of facts that prove they are a demented belief cult.

Check out the words of a proper critical thinking scientist on Darwin's proven plagiarism: https://t.co/6HDmlQBoDf pic.twitter.com/cWe5evRrvS

Posted by Dysology at 07:32 No comments: