Opportunity Does Not Explain Crime

Being impossible to refute and easy to vary, opportunity is a very bad explanation for crime. Read about Laycock's Mistake here: http://www.bestthinking.com/articles/science/applied_science/opportunity-is-a-very-bad-explanation-for-crime-a-critique-of-crime-science-s-dependence-upon-it
Posted by Dysology at 08:36 No comments:

We humans are pattern recognising creatures. Pareidolia is a psychological phenomenon where the watcher or listener perceives an image or sound to be significant.

In this video that I took while on holiday in Jamaica this year, it looks like a demon appears in the window glass. In reality it is no more than a weird looking random stain left by condensation. The 'demon' first seems to appear because the light refracting through the glass renders it invisible until I walk around to capture it at the right angle with my handy HD camera.

The Skeptick's Dictionary has more information on pareidolia

Karl Popper essentially falsified the idea that knowledge about something can be obtained from past observations (events). Famously, he used the example of what we once thought we knew about swans. If the only swans that had ever been observed by those classifying them were white was it correct to say that all swans are white? No. Because after black swans were discovered in Australasia those previously unimagined swans overturned existing knowledge. Popper essentially demonstrated what is today known as the fallacy of induction.

The impact of the improbable, based on Popper’s (1959) fallacy of induction, is a theme that has been very successfully exploited by many authors. One, whose best selling book I am currently reading, is Nassim Nicholas Taleb.

Taleb’s book, The Black Swan: The Impact of the Highly Improbable (Allen Lane/Penguin Books 2007), develops the black swan example in many areas of life to assert that social science and economic experts essentially know little more about their subject than the man in the street. The reason for this is that they fail to take account of chaos and uncertainty in the world. In the affairs of man there are too many possible and complex ‘known unknowns’ and ‘unknown unknowns’ for us to predict what will happen next. Yet, surely, if you cannot say what something will do next then you really don’t understand it at all.

The point of this blog post is that I have an issue with Popper’s fallacy of induction. One that the self-admitted black swan obsessive Taleb has, as far as I can tell, failed to see. My issue is that Taleb, among other Popperians, does not allow for the possibility that the entire fallacy of induction would be falsified itself if a mega black swan event came along (e.g. something as improbable as progress in quantum computing serendipitously making it possible to accurately predict future ‘black swan-type events’ in the affairs of man by analyzing past events. 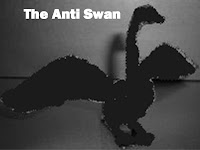 If a new discovery does overturn existing orthodoxy so that induction becomes a good method of knowing the future we should be prepared to name such an event The Anti-Swan.

I would like to thank Professor Michael Smithson for kindly sharing his thoughts on my ideas on this issue: Click here to see our brief discussion about this issue on his blog.

Posted by Dysology at 09:16 No comments: