Wikipedia is trying to improve its notorious reputation for unreliably by deliberately plagiarizing my work, and that of other myth busters, under the officially published Wikipedia 'master editor' policy that "experts are scum". Read the shocking story here. 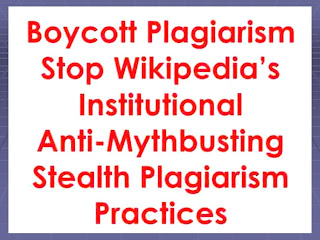 Posted by Dysology at 08:05 No comments:


Twenty First Century Knowledge Flux: The Impact of Internet Dating as a Research Technique to Determine the Veracity of the Knowledge Claims Regarding the Provenance of Words, Phrases and Concepts

Over the past few days I used freely available internet search engine technology to bust two myths that are credulously disseminated in numerous scholarly articles and books. Both myths were universally believed to be veracious academic ‘knowledge’. In effect, I used the internet simply to check whether the respective phrases “moral panic” and “self fulfilling prophecy” really were coined by the esteemed sociologists who are credited with coining them. They were not. You can read the two short essays that prove this beyond doubt (see Sutton 2013a and 2013b).
As a result of this research and its published results are on the Best Thinking web site, the phrase ‘internet dating’ now has two meanings, as does its equivalent ‘online dating’ (1) to use the internet to connect romantically with others - either solely online or else with an aim to meet potential partners face-to-face or else (2) to use the internet to check the veracity of claims made regarding the published provenance of words, phrases and concepts by researching whether others have in fact published earlier. As can be seen by these two inherent meanings of ‘internet dating’, the phrase is the concept. In this particular case the concept is either social dating or else dating the age of published words and phrases.
If the phrase is the concept, at least the most basic concept, as it is in the case of ‘moral panic’ and ‘self fulfilling prophecy’ then new discoveries that phrases such as these have an earlier provenance than purported by existing knowledge claims (see Sutton 2013a; 2013b) will undoubtedly open up new avenues of research into the work of previously neglected authors, events and themes. In the case of moral panics, for example, the use of this phrase in 1831 to describe potential problem escalation in the garrisoning of towns and cities during cholera epidemics reveals a whole new area for scholars to examine. Given the predicted certainly for a future flu pandemic this may be an extremely important discovery that will enable us to learn from the past – or at least to reflect upon what we have learned from it form a different perspective.
As more historical documents are scanned and uploaded, the latest knowledge regarding the provenance of words, phrases, concepts and the variety of concepts associated with particular words and phrases will be extremely unstable and short-lived.
Interestingly, internet dating as a veracity checking research method reveals that the phrase “internet dating” was first coined at least as long ago as 1994 on page 51 of Mindi Rudan’s book “Men the Handbook”, where it was used to explain the concept of using networked computers to arrange to meet potential love partners. Similarly, the internet dating method reveals that the term ‘online dating’ may have been first published in 1995 by David Fox in the title of his book Love Bytes: The Online Dating Handbook. However, this finding is limited to books and documents that have been uploaded onto the Internet and it may yet prove to be the case that these terms were in fact coined and/or published earlier and perhaps by different people. Only time will tell.

Posted by Dysology at 01:58 No comments:

All rights reserved
Article by Mike Sutton
Despite 45 years of claims made by British criminologists that they invented both the phrase and the concept of moral panic in the late 1960s and early 1970s, new research of the literature reveals that both have in fact been in use throughout the last 183 years in the USA and Europe.


Click here to see how I bust this criminology myth

Posted by Dysology at 13:40 No comments:

Read about the Channel 5 TV  25 a day fallacy here

Posted by Dysology at 09:51 No comments: