Posted about 5 years ago | On The Daily Journalist (HERE)

There are many competing explanations for the cultural origins of April fools day.

Wikipedia   has it that: “In 1508, French poet Eloy d’Amerval    referred to a poisson d’avril (April fool, literally “April fish”), a possible reference to the holiday.  In 1539, Flemish poet Eduard de Dene wrote of a nobleman who sent his servants on foolish errands on 1 April.   In 1686, John Aubrey    referred to the holiday as “Fooles holy day”, the first British reference.  On 1 April 1698, several people were tricked into going to theTower of London    to “see the Lions washed”.” 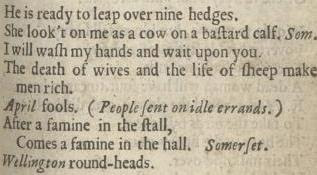 Today, April 1st 2015, no joke, honestly, with the ID research method, I found what appears to be the first English use of the term “April fools”:
April Fools: Etymological Origin 1678
“April fools – People sent on idle errands.”
Source:Ray, J. (1678) A Collection of English Proverbs. W, Morden, Cambridge University.
F. Ray is described as being a Fellow of the Royal Society. From his work, including a book on birds and another on poisons he appears to have been something of a polymath.