Darwin and Wallace worshippers (those who unscientifically and credulously desperately deify the proven liar and plagiarist Charles Darwin and his plagiarist friend Alfred Wallace) have lost their pants in public as a result of the new data that has acted like an unwelcome enema, leading them to soil themselves in public (e.g. here).

Here is just one very small, yet not insignificant, example of the New Data (detected with the innovative Big Data  IDD research method), which completely debunks the Darwinist myth, started as a lie by Charles Darwin (because Matthew had already told him the opposite was true) that Matthew was a little know author on scottish forest trees, whose original ideas no one read. In reality, Matthew's (1831) work was prominently advertised in the Encyclopedia Britannica (p. 407) of 1842, the very year in which Darwin wrote his first private essay on the topic of Matthew's prior published theory of what Matthew originally coined the 'natural process of slection' and Darwin four-word shuffle plagiarized into the 'process of natural slection'. This is just one of so many newly uncovered examples of the prominence of Matthew's book and the bombshell breakthrough ideas in it in the first half of the 19th century. 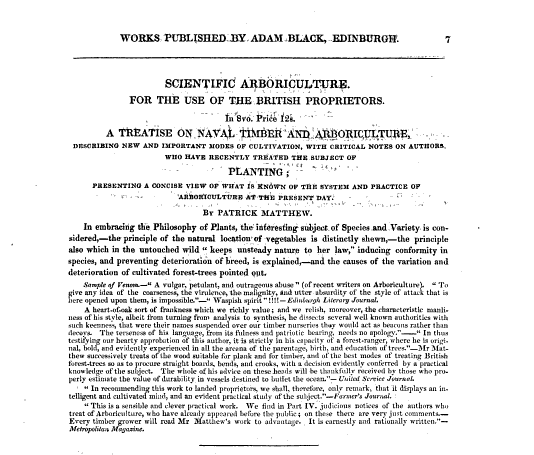