News From the Multiverse No. 4 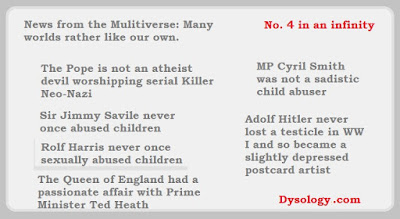 
Re: Refuting the Many Worlds Interpretation (MWI)

In relation to the following seemingly plausible and intuitively comfortable refutation of Many Worlds Theory:'...though the physical potential exists, the likelihood of tomorrow's papers headlining The Pope as a murderous gay atheist, seems bleak, to say the least. Therefore, are these many worlds constrained by what is physically possible, or by what is sensibly possible? That is, do mental/emotive concerns dictate what worlds are possible, or simply physical potentials? On the face of it, it would seem that the MWI doesn't have any recourse towards mental potential/agency.'In the UK that is akin to writing: imagine such an improbable world where the headlines would read that beloved national celebrities: Sir Jimmy Savile, Rolf Harris (MBE, CBE), and the politicians Cyril Smith (MBE) were prolific child abusing paedophiles. But we now know they were. If many Worlds Theory is right - a far more plausible world has them as upstanding citizens who always were exactly what they appeared to be.

Email ThisBlogThis!Share to TwitterShare to FacebookShare to Pinterest
Labels: Multiverse_4