It is a myth that William Herschel coined he term 'asteroid' for space rocks. Because expert archive research proves that the son of Charles Burney suggested it in 1801 and that this suggestion was conveyed to William Herschel. As Cunningham (2013) uniquely informs us: "Asteroid was Herschel's choice, but it was not his creation."

However, in busting the myth that William Herschel coined the astronomicall term 'asteroid', Cunningham has inadverantly created a supermyth in claiming that Burney Jr coined it, because the term asteroid was used by Girolamo Brisiano in a 1588 publication, where the words 'aster' and asteroides' were deployed in the context of stars, fully 213 years before Charles Burney Jr's father, Dr Charles Burney senior, offered 'his' son's supposedly newly coined astronomy word 'asteroid' up to Herschel to name space rocks!

In short, it is a supermyth that Burney Jr coined the astronomy term asteroid. 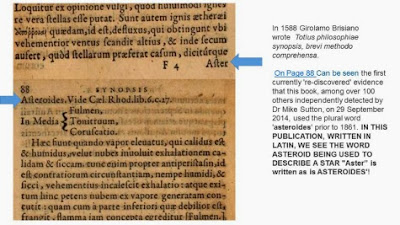 Moreover, the term asteroid had been used to name a star like flower in over 100 publications before 1801.