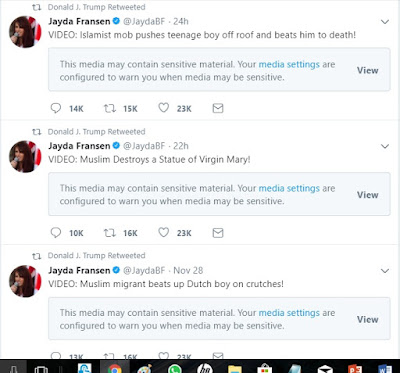 + AS SAID, FACTS DO MATTER

Then later we see Jayda Fransen - who is currently being prosecuted for hate speech -  in the UK make a personal video appeal to to President Donald Trump of the USA to ride in on his white charger and rescue her from her, ahem, persecutors.  Here https://www.facebook.com/OfficialBritainFirst/videos/1504761716335751/

If you think Trumps actions should be dismissed as mere buffoonery and to be ignored, then please think again. He is surrounded by dangerous people determined to ferment hatred https://t.co/R5Y8QLWsT9
— Matt Henn (@MattHenn2011) December 2, 2017


So who is this Jayda Fransen, who Trump thinks is worth re-tweeting as some kind of credible source? See: Britain First's Deputy Leader
Jayda Fransen's Family Tree Is A Bit
Awkward